The Metropolitan Hotel, on the corner of George and Bridge Streets in Sydney 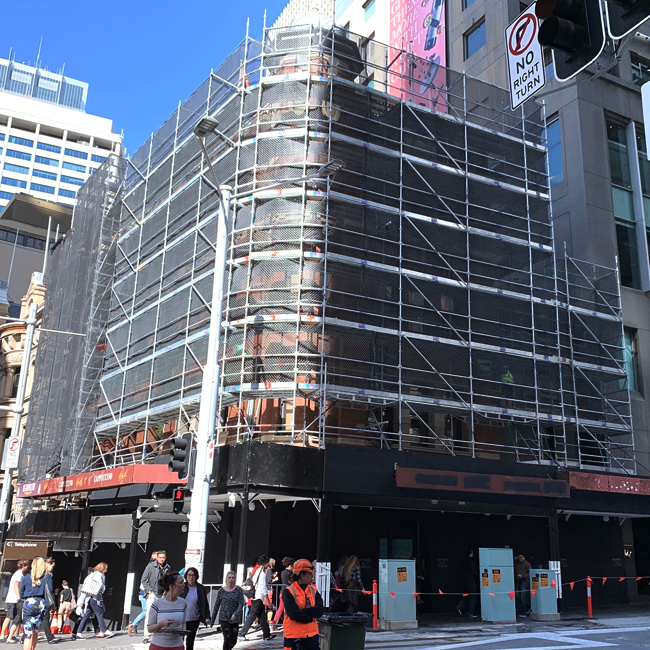 The Metropolitan Hotel, on the corner of George and Bridge Streets in Sydney, thought to have been built around 1876, recently underwent a refurbishment to refresh gaming areas, bar areas and the rooftop terrace.

Carried out by Infinity Constructions, the project had requirements to protect the heritage-listed building and its protruding façade features from damage by the use of scaffolding and tools. Infinity commissioned GM Scaffolding, whose appeal to Infinity was their use of the Proscaf scaffolding system, made and supplied by Sydney supplier SafeSmart Access.

GM Scaffolding had also created a very successful scaff bridge installation for the Sydney Running Festival; their use of Proscaf was attributed to that project’s success, and their customised and unobtrusive design made them an appealing choice for Infinity.

Consistent with the architecture of the era, the building’s north west corner is curved. With a normal scaff system, walkways that can only be joined at 90-degree angles create a gap between the platform and the building, and consequently a tripping and fall hazard.

GM’s choice to use Proscaf is partly based on the rosette joining system that allows for different angles and ties without using tube and fitting components. This Proscaf system fits snugly around the building without any excess support from street level, and it was installed quickly thanks to a big reduction in components required than that of other systems achieving the same weight rating.

The system is compliant with the Scaffolding Code of Practice*, and it helped Infinity gain efficiency during works; GM Scaffolding experienced a quicker install and tear down time, too.